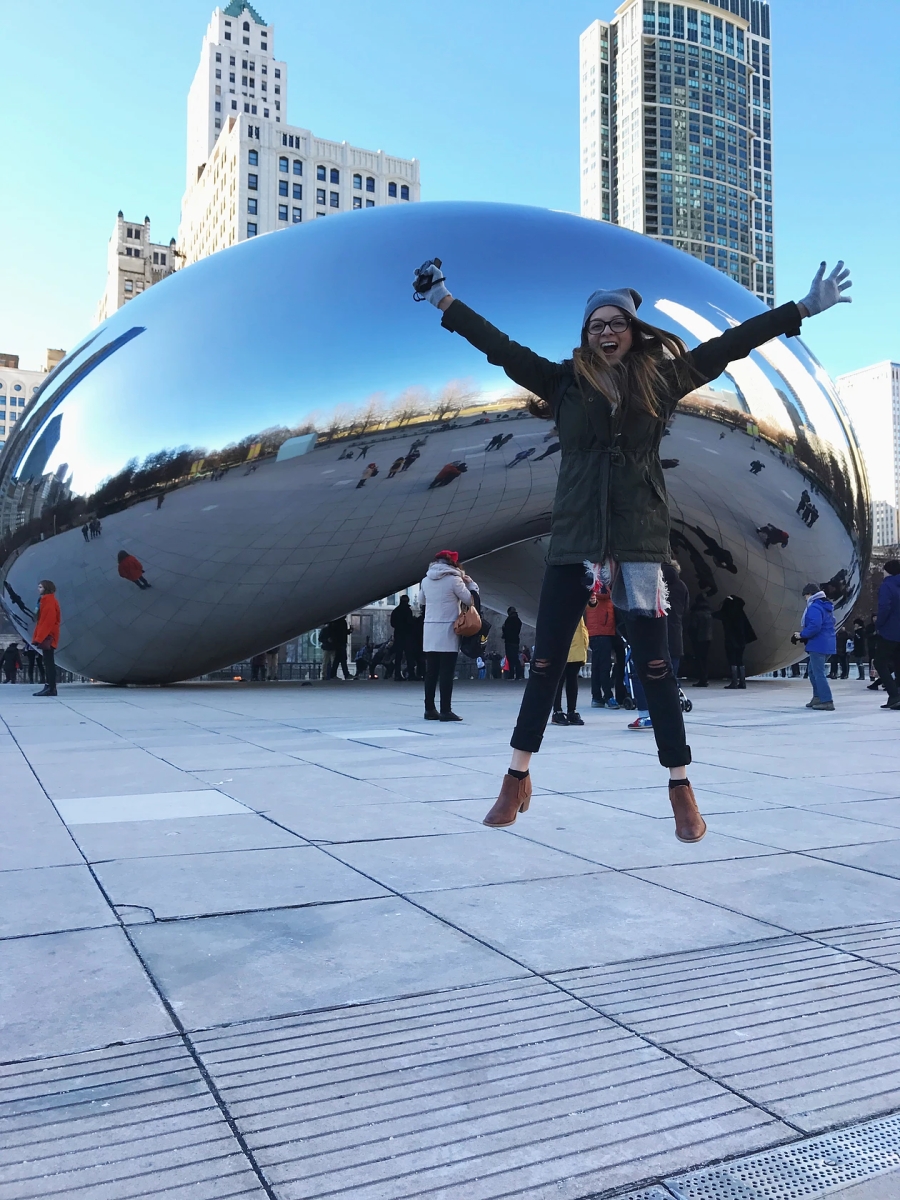 I went to Chicago, Illinois February 3rd, 2017 and immediately fell in LOVE with this beautiful city. Chicago is nothing like South Florida. It was 25 degrees with a -14 wind chill. We could walk the whole city rather than have to drive every where and the city was filled with amazing architecture every where you turned.

My boyfriend (Ryan) and I stayed in the city for 3 days and I would suggest having 3 to four days in the city to really be able to experience and take in the whole city.

We were able to do almost everything possible from eating Deep pan pizza and hot dogs to laying 103 floors above the city in Willis Tower.

Chicago is perfect for anyone that has a stomach for food and love for art.

We arrived to Chicago at 10am Friday morning and took the train from Chicago O’Hare International Airport and took the blue line train to Jackson where we were able to switch to a Red line train to Harrison. The total price for both my boyfriend and I was $10. Once we arrived to Harrison we were able to walk to Michigan Ave. where our hotel was located. We stayed at the Hilton hotel on 720 S Michigan Ave, Chicago IL, 60605 USA.

The 4-star hotel gave my boyfriend and I the best stay in Chicago. The hotel had restaurants, gift shops, Starbucks, high security and amazing views from all rooms. Someone is always there to open the door and greet you with a Hello. Before anyone can enter the elevator they ask for a key to validate you are a guest at the hotel. The location of the hotel is what my boyfriend and I loved the most. Located on Michigan Ave it is on the same road as all the major parks like Millennium Park, Grant Park, Maggie Daley Park, food places, and shopping centers.

Here is the link to the Hotel we stayed at:

We began walking down Michigan Ave and ate lunch at a sandwich place called Fontano’s Subs.

The subs were fresh and delicious. They had lots of hot and cold Sandwich and snack options. It came out to $20 for two subs, chips and two drinks which is not bad for a shop in the city.

After we ate our subs, we walked down to Millennium Park and saw the Bean for the first time.

The bean is a beautiful place to take photos and make silly faces in the mirrors. You can walk under the bean and also see hundreds of you as well. We were at the bean around noon and it was not overly crowded and was easy to take any photo I wanted to take with the bean. In the same park you can shop and go ice skating. Right next to the bean you can also take photos with the blue wall located directly in front of the Bean.

The Blue Wall is perfect for modeling photos or Instagrams and is always available for people to take photos in front of it.

JAY PRITZKER PAVILION is the park and stage where famous performers have performed and where lollapalooza is hosted every year. This is also located behind the Bean and is Beautiful to take photos. During the summer Chicago also offers a lot of free concerts here to enjoy on a daily.

The BP Bridge is a huge bridge that connects the Millennium Park to Maggie Daley Park.

Maggie Daley Park is the most creative, beautiful, fun park I have ever been to. If you have kids or are playful adults I100% recommend  making a trip to  this park.

The Park also has a amazing view of the city. We went on a Friday afternoon and only very few people were there. This Park has slides, swings, crazy mirrors, and views of the city. It can make any adult feel like a kid again because that is exactly how my boyfriend and I felt at this place.

We started our night and went to Willis Tower Sky deck at 7 pm we had a whole hour with very limited people and no lines to take as many photos as we wanted in the Sky deck. When you enter the building you go through what I would consider a mini museum and then head into an elevator to the 103rd floor where you oversee all the amazing city lights of Chicago.

After the Sky Deck we wanted to try Chicago’s Famous Deep Dish Pizza. We went to Lou Malnati’s which was highly recommended to us by friends who lived in Chicago and by uber drivers. You can dine in or call for carry out at any of their locations. Would highly recommend for anyone visiting the city.

We started the morning early and around 9am we walked to a cafe called Wildberry Cafe and was told we had an hour wait for a table. Being the travel prepared person I am I had a backup cafe to go to just in case this situation happened and it worked in our favor as Kanela Cafe was AMAZING!

I  ordered the Crunchy French Toast and loved it so much! It was like a cinnamon Roll in a cake form so good and so recommend.

Ryan ordered the Nutella S’mores Waffleand had the sweetest Breakfast of his life.

Right by Kanela Cafe is the River walk and Navy Pier. The River walk you get this amazing view, that makes you never walk to leave Chicago.

After our walk with a view and a sweet filling Breakfast we headed to the Wrigley Field where the Chicago Cubs play Baseball. The field is currently under construction but is still a cool experience to walk around and explore the baseball team’s field who won the world series in 2016.

After the baseball field we decided to try out the Shedd Aquarium.

The line was at least an hour wait to just get to where you buy your ticket to enter the aquarium. Then you had to wait in line inside the building. We did not want to waste that much time just waiting in line in this beautiful city. Instead we enjoyed the BEAUTIFUL city/river side view the Aquarium had.

Both of these photos were taking right next to the aquarium and were an unforgettable site. We even witnessed a proposal next to us. Would recommend a picnic or just visit the view it has to offer.

After enjoying the view we wanted to try Chicago’s Famous Hot Dog. We went to Devil’s Dawg which was a cute shop with every hot dog, shake and onion ring you could ever imagine.

After we ate hot dogs we headed back to the The Bean to meet some of our friends and viewers. Then right by The Bean is the famous Chicago Theatre.

Ryan and I then went to PORTILLOS WHICH YOU MUST GO TO! We had the Chocolate Cake Shake and Fluffy was right it is the best thing ever. Inside is a two story restaurant, and has five different ordering stations as if you were in a baseball stadium ordering food, it was the coolest place ever.

Day three was our chill day as we went to my brothers’ performance for the majority of the day. We began the day with a quick Starbucks run and may I say the double chocolate pound cake is THE BEST. We then wanted to visit the United Center where Dwanye Wade our ex local Miami Heat player now plays with the Chicago Bulls.

At this Arena they used to have a huge Michael Jordan statue where people would come from around the country to take a photo with just like us. As we were there and we were with other tourists looking we were informed that when the Blackhawks, a hockey team who also plays at this Arena, won they replaced MJ with a BlackHawks statue. After the Arena Ryan and I went to watch my brothers perform in Lincoln Hall. My brothers are part of a tour called Part of my Story Convention. My brothers are also Youtubers, Younowers and inspiring DJs. They are well known as 99goonsquad. After, the performance we hoped back on the road to the O’Hare airport to come back to sunny south Florida.

I WOULD HIGHLY RECOMMEND CHICAGO IF YOU ARE A CITY LOVER, EVEN IF YOU ARE UNDER 21 THERE IS A LOT OF FREE STUFF AND ADVENTURES YOU CAN TAKE.