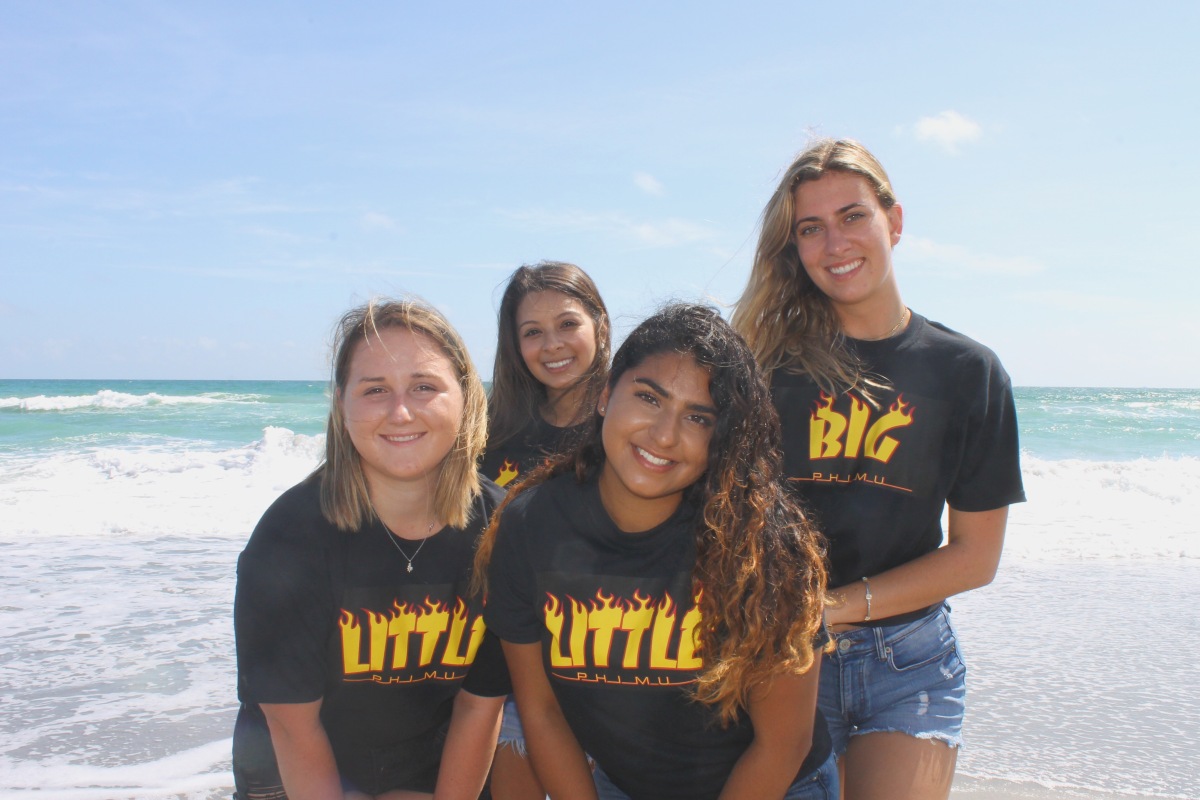 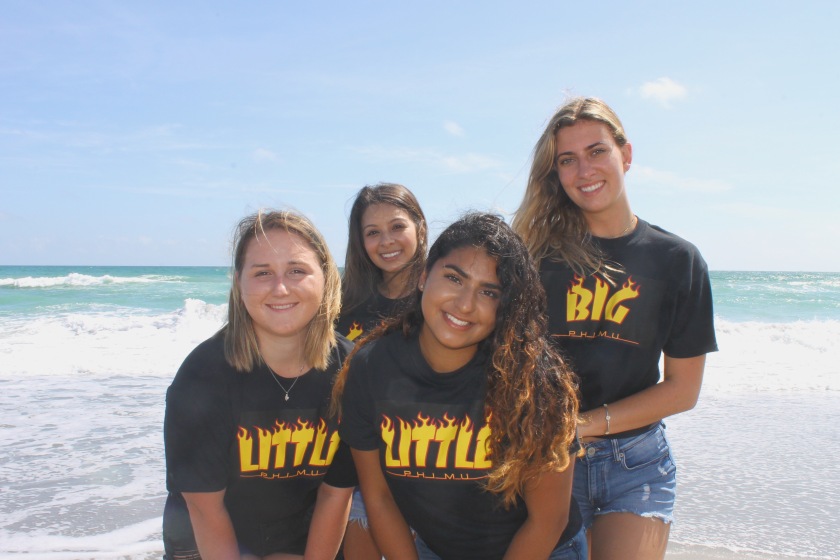 HEY HEY!!! OMG SO LAST WEEK WAS BIG LITTLE WEEK!!!! I NOW HAVE TWINS!!! Okay so some background about my sorority and myself. I am a Junior in College and I have been a Sister of Phi Mu since Fall 2015. It has been almost 3 years of being an initiated sister! Time flies!!! I also got my first Little Sammy Jo in the Fall 2016! 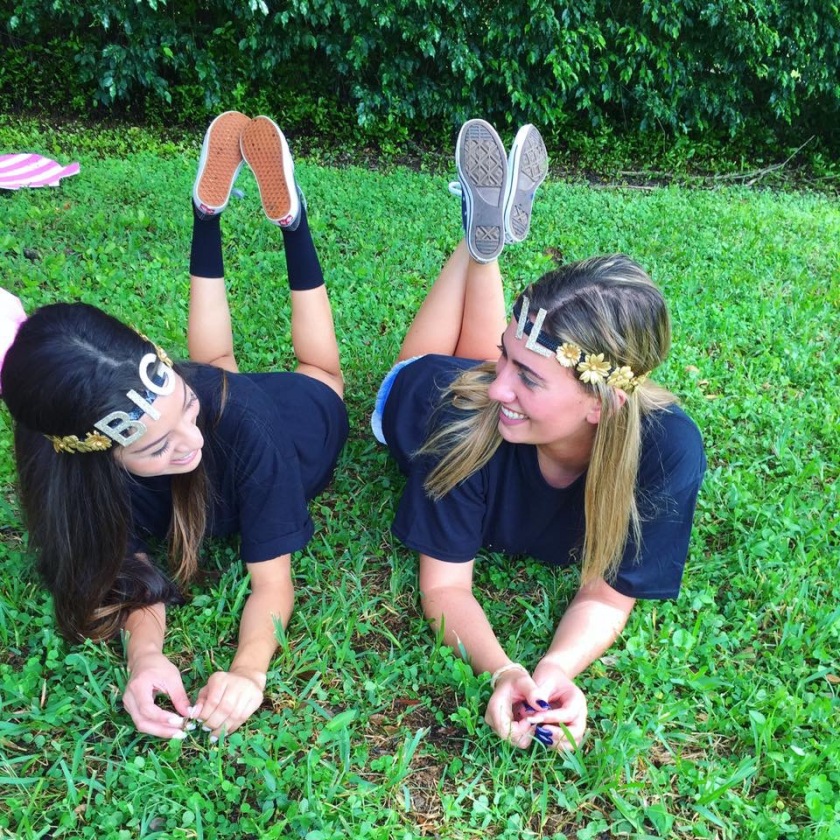 I love her to death and she makes me such a proud big! When I got SJ we were a random match. When I say Random match, I mean we both were not on each others list but the KROP chair and comity thought we would be a good match so they called me and asked if I would take SJ as my little. I said of course!!! My Gbig and I stalked all her social media and got so excited to extend the family!!! So to talk more about how Big Little works. After bid day you kind of have to go on dates with new members and meet as many people as you can to create connections and forever friends. On the 3-4th week of The Phi program or new member program the littles or Phis will write down 1-5 who they would want as their big. The bigs will also do the same thing and it becomes a mutual decision. I love this family so much! So a year goes by and now I am becoming a Gbig!!! My little is taking a little!!! I feel so old!!! However, I have talked to a new member named Ariona and we became close and we were matched as big little. I got a call saying I was matched with her and I was so happy but nervous at the same time! 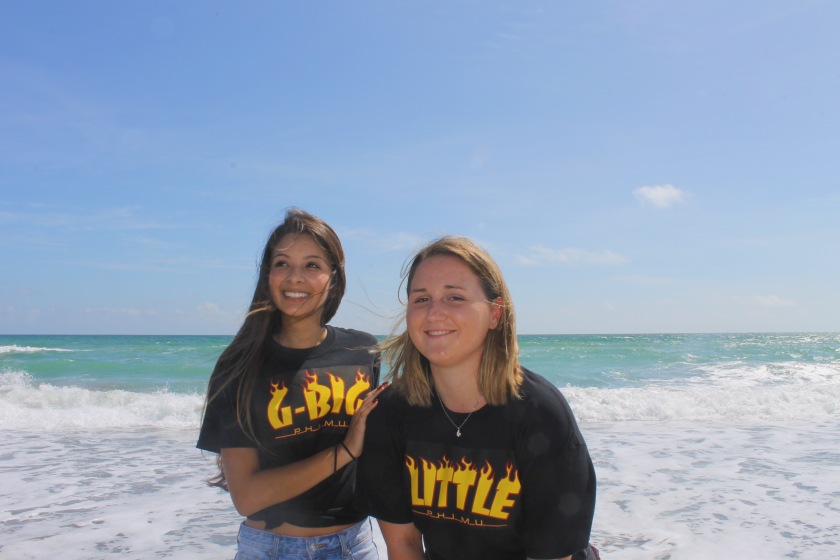 I had to tell my little SJ she was becoming a twin and I did not know how she was going to react or if she would like her…. I told my little SJ that this was her reveal and I wanted this day to be her day as I had already had the experience of becoming a big for the first time. So since I got another little that meant I HAD TO START CRAFTING!!! and START MAKING BASKETS!!! 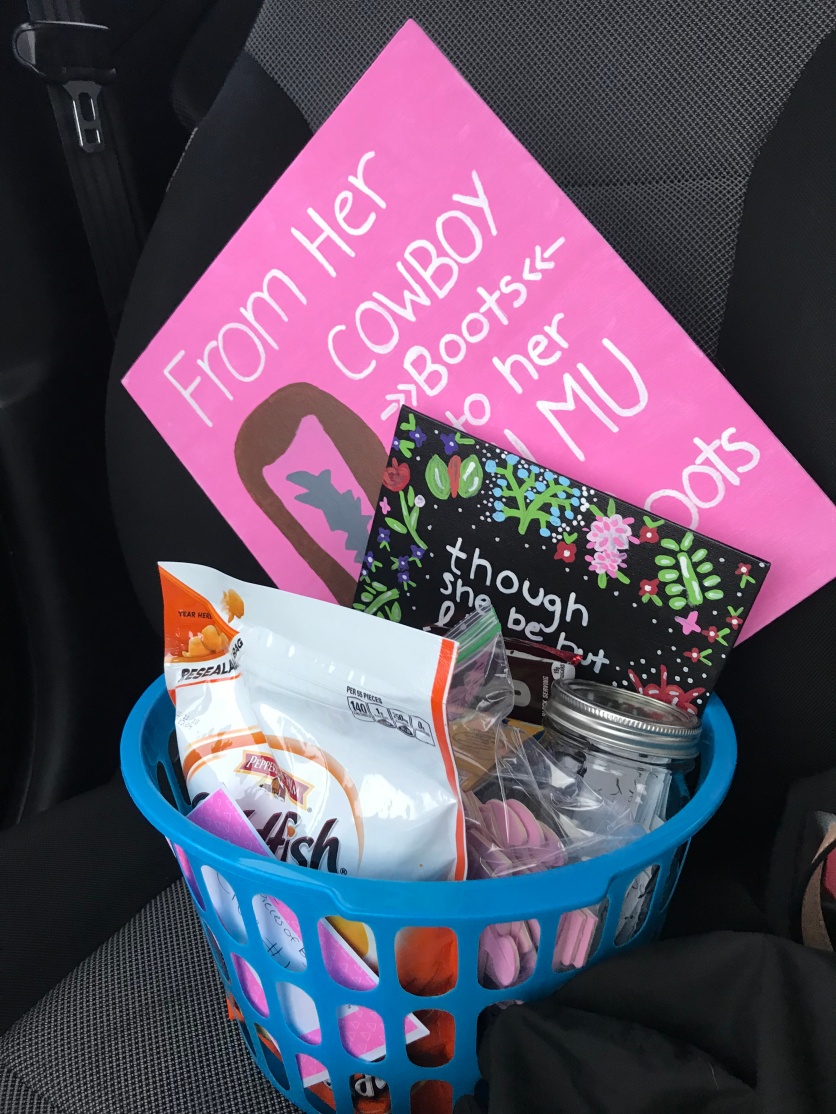 So the first day theme which was last Wednesday was “Little pieces of Big advice” so I put all her favorite snacks, Goldfish, Dark Chocolate, and Pop tarts… funny thing is she did not put pop tarts on her list of favorite snacks but when we first talk we talked about pop tarts and I remembered so I put pop tarts in the basket and she said that she knew just from the pop tarts that it was me L O L. I painted a puzzle, and two canvas one with lyrics from her favorite country singer Jason Alden, along with a Jar of advice. 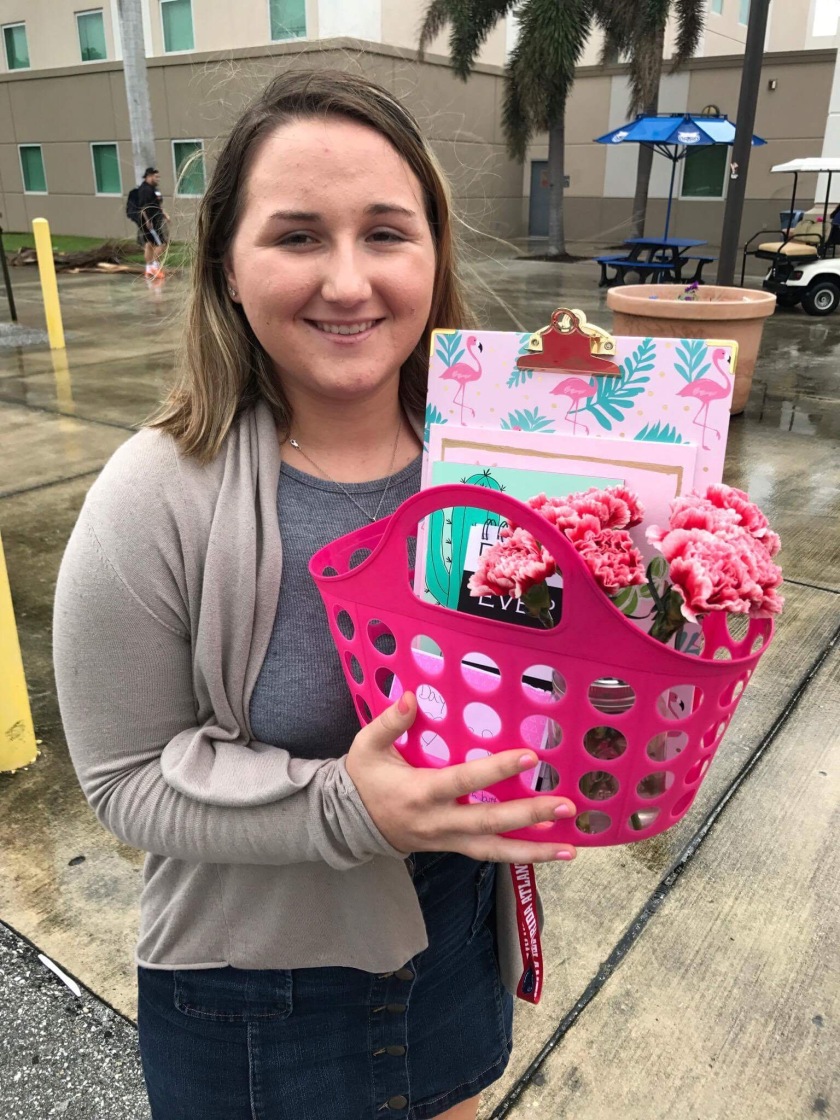 The second day was “Grow with Phi Mu” so I put rose colored Carnations which are Phi Mu flowers, A canvas that says “You’re Stuck with me” and two Cactus haha get it lol A clipboard because a lot of the time in college you do not have a desk and need a clipboard. I also put 2 notebooks. 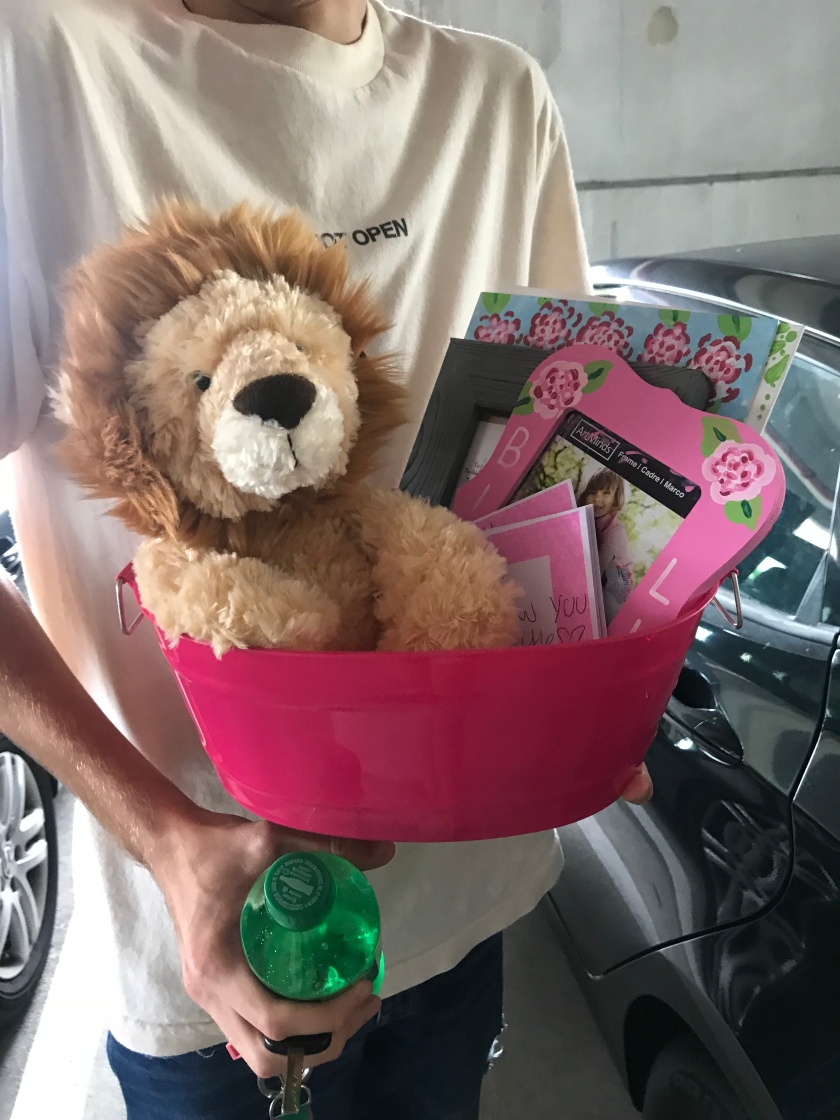 The last day BEFORE REVEAL!!! It was all about Phi Mu! I put a lion as our mascot is a Lion named Sir Fidel! A canvas I painted for our first Big Little photo! A frame with our Creed in it along with two canvas I painted. THEN WE WENT TO SLEEP AND IT WAS REVEAL!!!!

Big Little Reveal was on the beach and what we did was we put 4 clues in their last basket and said do not open and bring to reveal. So they all read off their first clues which all three were “My big has brown hair,” then their second clue which was “My big is a Junior.” Then they all read their third clue which was a random fact about their bigs. My random fact which was lame… I should said my favorite ice cream flavor or something but I said I like to travel and film. Then the Phi Director said “My big loves me” and thats when we all (bigs) ran to our littles. We became one big family! My little Ariona is now an Aunt to my glittle and I now have twins. I could not be happier and this will be a good learning experience as I now have to balance my time equally and be a mentor to not one but two people.

Hope you enjoyed reading my experience of big little round 2!!!

Let me know if you have any sorority questions or if you are a part of greek life!!!

2 thoughts on “I GOT ANOTHER LITTLE”